Acupressure Mat Benefits: 23 Reasons to Roll out Your Mat Today!

Acupressure is an ancient Chinese therapy that is practiced by health professionals around the world. However plenty choose to enjoy the treatment in their own home!

Chronic pain statistics have shown many are trying alternative therapies to cope with daily pain. See below 23 proven health benefits of using an acupressure mat:

1: NATURAL PAIN RELIEF
One of the key benefits of an acupressure mat is that it’s a natural form of pain relief.

With 191 million opioid prescriptions dispensed in 2017, and the US government declaring it a public health emergency, anything that can help manage pain in a natural way is sure to be desirable.

A major systematic review in 2014 looked at all the research surrounding acupressure and pain.

Findings were overwhelmingly positive and showed that acupressure was effective for a variety of different types of pain.

The study concluded that health professionals should consider the use of acupressure as therapy for managing the pain associated with many conditions.

2: PRODUCES ENDORPHINS
Many health professionals recommend acupressure as the process is found to release endorphins.

Endorphins work in a similar way to opioids. Often referred to as ‘the body’s natural painkillers’, they help to reduce pain and produce a feeling of euphoria.

Research published in 2017 showed that acupressure can stimulate the production of endorphins which helps to block the pain signals reaching the brain.

3: LOWERS HIGH BLOOD PRESSURE
Clinical trials conducted in Taiwan looked at the impact of acupressure on patients with hypertension.

During the trial, it was found that blood pressure was lowered for a period of at least 30 minutes.

More research is needed to see the extent to which acupressure can reduce blood pressure on a long term basis, however, the project proved it to be effective as a short term solution.

4: EFFECTIVE FOR MANY SERIOUS CONDITIONS
Using an acupressure mat has also been shown to provide relief from a number of serious conditions.

A study conducted in Germany in 2012 looked specifically at the impact of acupressure mats on those suffering from chronic neck and lower back pain.

It showed that pain was relieved in both areas. The results also demonstrated the impact that the mat can have on the way the body processes pain.

Acupressure has also been shown to have a positive impact on patients coping with myocardial infarction.

An interesting project conducted in 2018 looked to see the impact acupressure had on heart rate and blood pressure.

Initially, acupressure appeared to have little impact. However, roughly 30 minutes after finishing treatment blood pressure and heart rate were found to be significantly lower.

5: AIDS WITH SPORTS INJURIES
For those suffering from sports injuries, results of a study conducted at the University of Otago revealed promising findings.

Acupressure decreased the reported pain scores in athletes with acute injuries but not anxiety levels.

The conclusion of the study was that acupressure could be effective in a sports setting, especially if there is limited access to medical care.

6: IMPROVES SLEEP
The number of people suffering from sleep problems is rising at a rapid rate. Research shows that acupressure can help.

A study in 2015 looked at the sleep of menopausal women and found that sleep was improved significantly following acupressure treatments.

A furthermore recent study focussed particularly on self-administered acupressure for symptoms of insomnia.

Respondents in the study were taught how to administer acupressure then monitored and asked to keep a diary to record the quality of their sleep.

It found that if individuals were shown how to apply the treatment correctly this could be used as a tool for treating the symptoms of insomnia.

Those suffering from neck and back pain, in particular, reported that their muscles felt relaxed after sessions.

There is currently little research to back this up, however, look at reviews of many acupressure mats and you’ll see this feedback.

Acupressure has been shown to help with fatigue and to increase energy levels.

An experimental study at Chang Gung Memorial Hospital, Taiwan focused on patients suffering from hepatocellular carcinoma, the most common type of liver cancer.

Findings proved that acupressure can improve fatigue, and it was recommended that educational guides should be created to help patients take advantage of the therapy.

Through a major study in 2015, it was found that depression, anxiety, and stress can be positively impacted by acupressure.

Subjects were given treatment three times a week for four weeks and the results were positive.

It was found to significantly reduce depression, stress, and anxiety, in this case for patients with end-stage renal disease on hemodialysis. 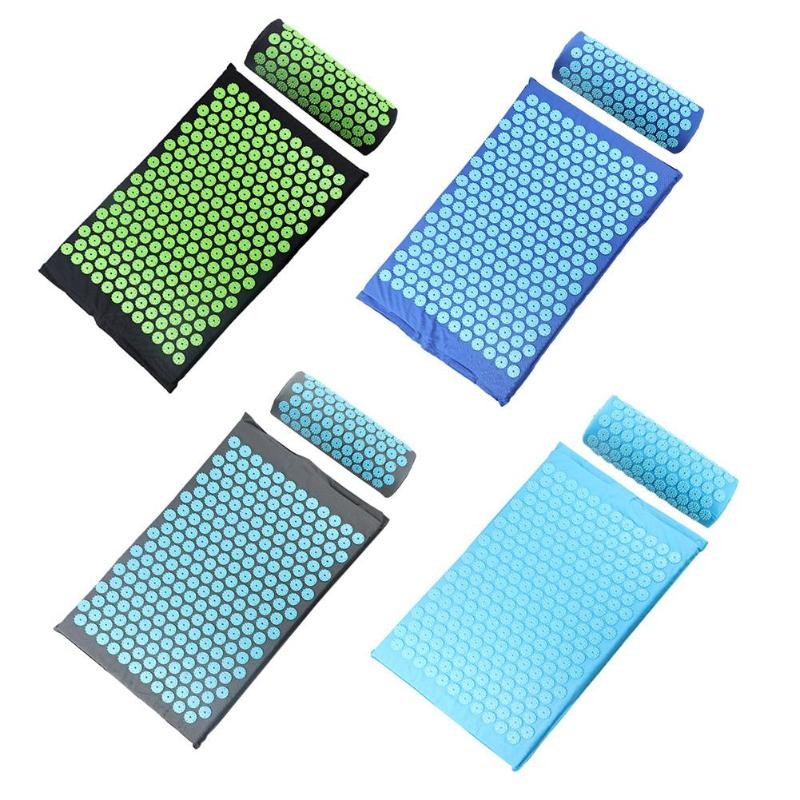 It might seem like an unlikely benefit, but acupressure has been shown to improve the quality of life for those suffering from digestion problems.

A 2015 research project looked at perineal self-acupressure which aided in the movement of bowel function and generally was found to improve the wellbeing and quality of life of those suffering from constipation.

Many manufacturers promote the fact that acupressure therapy, when applied directly to the face, can have a positive impact on your complexion.

Michael Reed Gach, Ph.D., an expert on acupressure therapy does suggest that the technique brings more oxygen to the skin which in turn improves the appearance.

However, currently, there is little evidence to substantiate the claims.

A research project in 2010 found that acupressure, specifically ear acupressure, had a positive impact on weight loss.

In fact, it showed that over the course of eight weeks BMI was significantly reduced.

There is little other evidence to prove or disprove the claim, however, many manufacturers (like Bed of Nails) highlight it as a feature of the mat.

13: POSITIVE IMPACT ON HEADACHES AND MIGRAINES
Acupressure has been shown to have a positive impact on chronic headaches.

Research conducted in Taiwan in 2010 compared acupressure with muscle relaxant therapy and found that acupressure was much more effective.

Six months after just one month of treatment the effects still remained.

Consumer reviews of the Life Modernized Acupressure Stress Relief & Relaxation Mat back up this finding, with many mentioning how wonderful the mat can be for reducing both the frequency and intensity of migraines. Reviews found at bottom of the page.* 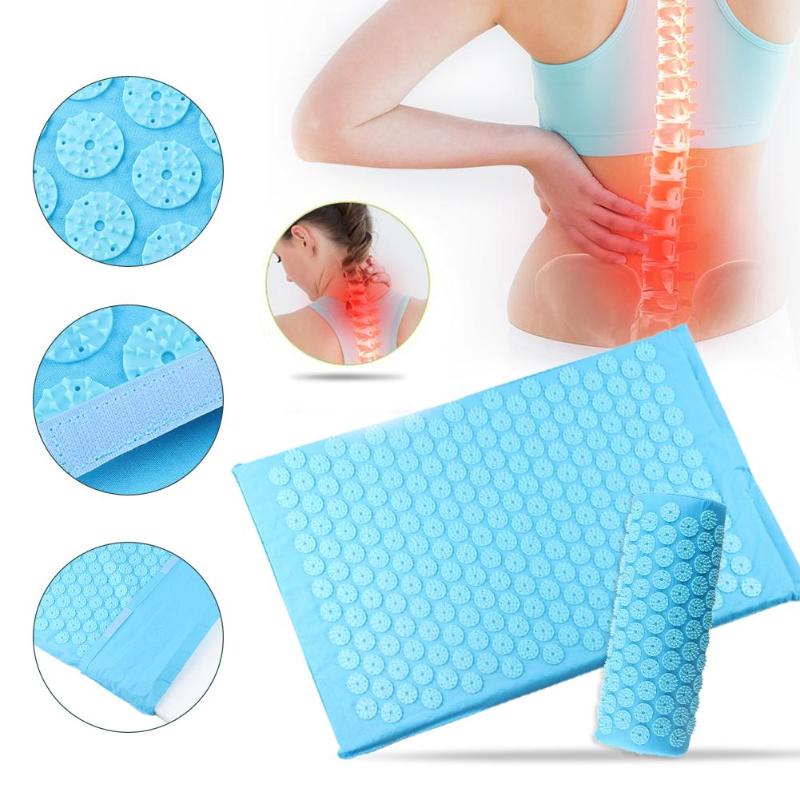 14: MANAGE YOUR OWN TREATMENT
The ability to manage your own treatment is a big selling point of the acupressure mat.

You can carry it with you wherever you go and use it as much or as little as needed to help you get a handle on your daily pain.

Research that looked at pain severity in female nurses with chronic back pain, determined that acupressure was effective in reducing pain but also that it was an easy therapy with no side effects.

16: LONG TERM USE
Research published about acupressure always highlights the fact that it’s a safe treatment option that can be used on a long term basis.

17: LOW COST
Compared to other therapy options for pain, acupressure mats are a relatively affordable choice.

18: NON-INVASIVE
When you want treatment for a serious condition you might have been given a number of invasive options.

However, acupressure is non-invasive so it can be tried without the element of risk.

19: COMPACT
Acupressure mats roll up just like a yoga mat, so they’re compact. Ideal for carrying with you or storing away at home whenever you need it.

20: PORTABLE
Many acupressure mats, like this Life Modernized Acupressure Stress Relief & Relaxation Mat, allow you to take it wherever you want.

21: USE AT HOME
Acupressure is carried out by physical therapists in many clinics, however, the benefit of an acupressure mat is that you can use it in your own home!

It’s ideal if you have pain that strikes without warning, as you have a pain relief option that you can roll out whenever you need it.

22: PURCHASED OVER THE COUNTER (OTC)
You don’t need a prescription to purchase an acupressure mat. Simply click here to purchase your very own at-home pain relief solution.

23: ENHANCE YOUR YOGA AND MEDITATION PRACTICE
Regular users of acupressure mats appear to be reunited in how much their acupressure mat aids them in their yoga practice.

Many (users of Life Modernized Acupressure Stress Relief & Relaxation Mat) speak of another level of relaxation and how the mat adds a new dimension to their practice.

Others spoke of using it in meditation and how it can be used as part of a relaxation routine.

With so many benefits, it’s time to roll out your acupressure mat and reap the rewards!